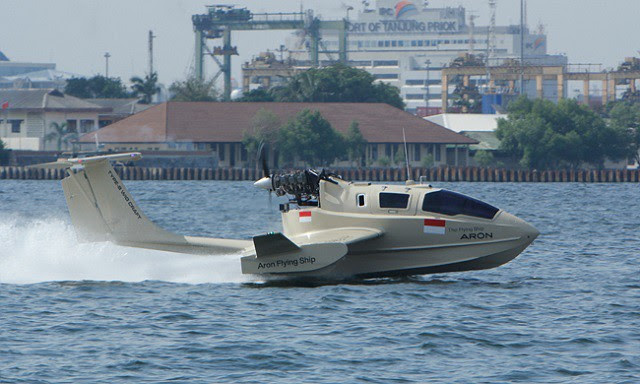 The Aron M50 during demonstartions in Indonesia. Picture: Aron
According to several South Korean media, Indonesian Navy and Coast Guard would be interested in ordered up to 20 Aron wing in ground effect craft, following an initial order of 2 units by the government. The South Korean company conducted a demonstration campaign at the Indonesian Navy (TNI AL) base in Jakarta.

The company previously received a lot of attention during INDODEFENCE 2012 which was held in November in Jakarta.

Aron would be offering the M50 variant of its craft in a littoral combat configuration to the Indonesian Navy and Coast Guard.

Equipped with Optronics systems and a small naval radar, an armed Aron M50 can fire small anti-ship missiles or guided rockets to attack larger ships. Aron deployed from coastal bases can provide a country with swift first response capability against trespassing vessels on its maritime territory. According to the manufacturer, Aron is an asset in strengthening core coastal patrol operations. It is able to assist in tactical response to enemy ships and control of long distance ocean borders.

In its basic configuration, the WIG craft is capable of reaching a top speed of 200 Km/h and has a range of 800 Km.